As a Zimbabwean (a sunny, landlocked country in Sothern Africa!), expressing emotion has generally always been frowned upon. It’s showing you are meek, probably impressionable, but definitely weak. At least that’s the experience Zimbabwe gave me. You undoubtedly have to be strong every day.

No wonder we’re the most literate country in Africa. Zimbabwean people are not easily impressed. Even honorable fathers don’t say, “I love you”. But I’ve learned that that’s perfectly okay. Their actions speak louder than any voice cord. My baba (father) evidently did. Mildly unemotional, his actions preceded any words he spoke and that’s what I mostly respect about him.

So, even to scribe a note or poem about my little brother may be judged as an emotional outcry. However, I really don’t care. This is who I am, who he is. So here reads a dedication to my little big brother:

His name is Mfana. He’s one of the coolest kid on the block. Always calm and collected. Driven, generous and definitely more pensive than most realize. He’s sometimes arwardly silent. I’ve probably never seen him cry in the last decade whereas my tears, on the other hand, could fill a bathtub. What I’ve come to realize is that we are threaded differently, yet built on the same foundation. I’m the overly emotionally and concerned one while he’s the level-headed little-big brother. I just happen to be the one he calls Mukoma (big bro in our expressive mother tongue, Shona).

We are blessed to have been raised by loving and Christ-abiding parents. We grew up protected and sheltered from the harsh realities of life. Thankfully, we got our fair doses as we grew older. We were brought up humbly and cherish fond memories. We childishly fought. We scratched and bled in our wrestling matches (WWF), however our bond was unbreakable.

Unfortunately, we were separated by opportunity, which I will barely revise later.

We often reflect on the raw principles that make us the bonded men we are today. I admire him. I mean who has lived on 3 continents, played international sports for his country, speaks two languages fluently, and has a Master’s degree in something called Systems Design. He’s virtually been to every corner of globe, and yet humbly still cooks for mother when her arm is in pain? He’s athletic and was even the sportsperson of the year in high school. He played a physical discipline for our country and gave some of his wages to my little grandma in the African rural areas. The same little big brother our gardener Thomas called “Rayn”.  For the two years he voluntarily and gladly labored for our family throughout our adolescent years. His cooking was amazing and we secretly crept into his quarters for his leftovers. Thomas, I am grateful for the time we spent. You were almost the big brother I was looking for. However, this scribe is for my little big brother. The same naked Mfana who was ferociously spanked by Sisi Saru (our loving, motherly and compliant maid) for jumping into our sparkly swimming pool after strict instructions not to do so until homework was complete.

The same Mfana who got a sweet beating from mother  when he tore up his math homework and was found guilty after she traced the shreds of evidence in the trash can or the bin as we called it in our household. The bin was kept outside in the blistering cold!

You might wonder why I call him my little big brother. Well, I think I literally, vicariously lived through my little brother for about 7 years. I think he is my big brother, except that the good Lord thrust me on earth twenty four months before his entrance.

He left home at thirteen to take up a rugby scholarship at an esteemed private school in South East England. I mean, who accepts and does that? At the ripe old age of 13 I was busy terrified about high school bullies while he was facing a whole country by his damn self! Imagine the homesickness, the confusion, and the loneliness. Again, who does that? I guess the resilient Mfana. The one my old friend calls “Razzle Dazzle”.  That’s my little big brother.

April 1999, I got my TV debut for a dairy company’s commercial. “Go Flavor! Go Ravor!” was the slogan. Some of you readers may be captured by the nostalgia. It’s just that you had to live in Zimbabwe that year. This commercial was my claim to fame in our spick-and-span Harare household. I must have thought “Hey man, while you’re in England, I’m on TV. I must have been gratified to know I maintained the helm as the big brother of the household.  I later squandered my wages on a BB gun and 100 bullets that I shot aimlessly at quail birds lurking in the trees. If only I knew how to invest back then, I’d be on a yacht now. Z$1,000 back then was a fortune for a thirteen year old. But hey, I got to buy my own BB gun. I earned it and I did what I wanted. Selfishly.

Mfana returned for an Easter holiday a year later to remind me he was still my little big brother. Not only did the familia spend quality time, but it was also the moment for Mfana’s debut on telly. The beautiful TV Host, Patricia Mabviko, invited him to be a guest on a show called, “Breaking New Ground”. It was an one on one interview series that showcased young Zimbabwean talent, the future of Zimbabwe. Thank you Patricia. You are simply our version of Oprah! I wish you’d come back with a “Where are they Now?” series.

As the older brother, I too would get to be on the show. I’d get my first dose of what it was to live vicariously through my little bro. The focus was on his achievements. I was so proud because he was modest and said I was the reason he first pursued sports. A rugby magazine later confirmed this story. Wow.

My little big brother was unpretentious at the tender age of 14. I wish more adults would learn about the basics of humility, but that’s for another blog post. In the show, I confidently predicted that he would go on to be a professional rugby player which he did five years later and even featured the global’s premier rugby publication.

Ndipei sando dzangu! (Shona slang for, Give me my recognition!).

Anyway, it was extremely exciting because after the broadcast, my Nokia 3210 was vibrating with all these chicks (adolescent girls as we called them from 1999-2001) saying, “Hi SonofGuruve,” I saw you on TV. Was that you and your brother on the television?”.

I chuckled and said, “Yes”.

I was happy I tell you. I got to keep my status as the big brother who led Mfana to make his national television debut.

I will stop this post here because there is too much to write and too much and too much to share. It will have to be a memoir capturing our journey.  All I will say is Mfana has been my little big brother because though younger, he has acted like the older brother I don’t have. He is a constant source of inspiration, humor and brotherly love. He dragged me through bouts of despair, depression and showed me what it is to be selfless and to always keep things simple.

This is a snippet of the joy I have when memories come rushing. As this is the month of your birthday, may the good Lord light the torch beneath your shiny feet because you continue to be a great little big brother!  So cheers to you, cheers to your bright future, and may you simply get to experience the joys of a happy birthday. Our greatest gift is life and may you continue to revel in it. We likely won’t be together, but hey, we don’t need this post to remember how special you are. 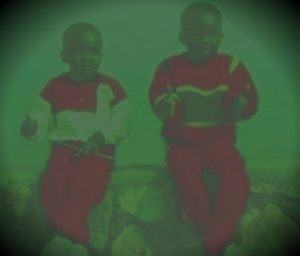 19 thoughts on “My Little-Big Brother”